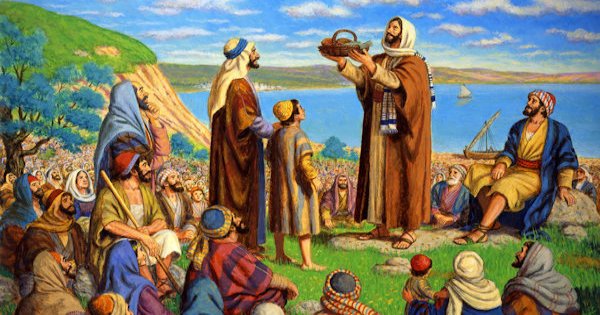 For three and a half years Jesus gave freely ministering to thousands of people. But Jesus never asked for money, never asked people to give to His ministry, and never took up an offering. He healed countless numbers of people so much so that thousands would gather to see the miracles or be healed. Yet, Jesus never asked for compensation from those He ministered to even though He would have been justified in doing so. Instead, He gave freely without any strings attached. He always acted out of love and generosity just as His Father would do.

Jesus Fed Thousands But Never Asked For A Donation

There where two occasions where Jesus and His disciples feed thousands of people. Both times they gathered to hear Jesus’s teaching and see the signs and wonders talked about throughout each town.

On one of these occasions, there where over 5,000 men not including women and children. A little boy offered Jesus his lunch with only five loaves and 2 small fish. Then Jesus used this small gift from a little child to bless thousands. Jesus blessed what was given Him freely and had His disciples serve over 5,000 people from a child’s small lunch. They all ate as much as they wanted until they were satisfied. There were even left-overs for the disciples. What an incredible miracle! Yet, Jesus never took up an offering or asked anyone to pay for their meal.

How was it possible to minister as Jesus did without ever asking people to give? The answer comes from 3 unnoticed verses in the Bible from Luke chapter 8.

Here we find that a handful of women gave freely to support Jesus and His disciple. They gave in response to the Father’s love and generosity towards them. The Father showed His love to each one by either healing some dread disease or freeing them from demonic oppression. They were overwhelmed by the Father’s generosity and responded to His promptings to support Jesus’s ministry.

Jesus never asked them to give nor did He ever tell those around Him of the great need and cost of doing God’s work. Instead, Jesus spent time with the Father and asked only Him to supply every need. Jesus never had to ask others to give because He was totally dependent on the Father to take care of Him.

The Father took care of Jesus’s needs by abundantly blessing others in every way. They in turn desired to give back freely to the Father and were able to do so from the overflow of the Father’s generosity. When the Father prodded their hearts about supporting Jesus’s ministry they gladly jumped at the chance to do whatever the Father wanted them to do.

The Only Reason Why You Should Give

Likewise, the only reason why you should give to God and His Kingdom’s work is because He asked you to do so. Giving should always be in response to what the Father is asking you to do, not what others are telling you to do. You should never give because of some great need others have shared with you. It is always God’s responsibility to supply their needs not yours.

Also, those who gave to Jesus never expected anything in return. They always gave in response to the Father and His generosity toward them first. In the same way, you should not give to receive any benefit from your giving including a charitable tax-deduction.

Therefore, your giving should only be in response to the Father and nothing or no one else. The Father will never ask you to give first to Him so that you can get something back from Him. You do not bless God so that He can bless you. That is a deception and lie from the enemy. On the contrary, the Father wants to abundantly bless you first so that you can respond to His love and generosity. Then you will want to jump at the chance to give to Him when the Father asks of you because it will come from the overflow of the Father’s generosity. You will want to do anything the Father tells you to do once you experience the abundance of His love and blessing.

Give Only In Response to the Father

Your giving should always be in response to the Father’s heart. You should never give to any ministry, including this one, because someone told you to give to their needs. I will never ask you to give because I am trusting the Father to take care of all my needs. So you are not responsible for my needs or anyone’s needs. In conclusion, you will want to give back to the Father because of His generosity towards you and only when He asks you to do so.