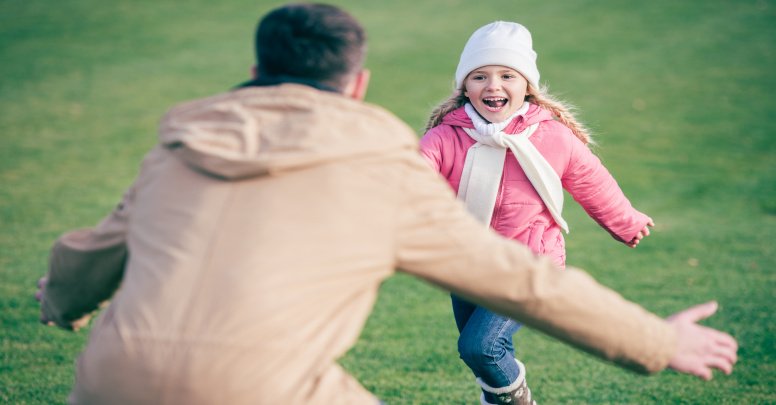 As I was meditating on the Heavenly Father with some friends of mine, I heard deep within my heart that I should never stop playing catch with God. Then I had a vision of a little girl in a golden grassy field chasing after her father. The father ran just a little ahead of her. Then He slowed down just enough so that His little girl could catch up to Him. When she got close, He swooped her up in His strong loving arms spinning her around over and over again while they laughed and giggled freely. At that point, He put her down and started the game of catch all over again. This happened over and over for what seemed to be an eternity in a moment of time.

You Are Just Like That Little Child
Who Adores Her Father

Then the Heavenly Father spoke to my heart about what I was seeing, “You are just like that little girl who adores her father and wants to spend an eternity with Him pursuing God all the time. Come have fun with Me playing in the golden field I have set before you.

Run After God With All Your Heart

So Run after Me with all your heart’s passion and chase after Me. For I will never be too far ahead of you that you cannot catch up to Me. In that moment, I will snatch you up into My arms as we go round and round together as one. This will bring joy and laughter to My heart and all those looking on. Then it won’t be long when I put you back down to go a little further in the journey I have set before you.

The Father then encouraged us to never stop, “So come let us play this game of catch over and over again. I won’t stop, if you don’t stop. For I can never tire of being with you My cherished little child. I want to spend an eternity with you playing in My gold meadow of peace and serenity.”

The Father Wants Everyone
To Chase After Him

After the Father stopped speaking, I saw all of us chase after God never getting enough of Him – always wanting more. He will never get to far ahead of you that you cannot be snatched up in His loving strong arms. As He will take you on a new exhilarating ride with Him. You will experience all of Heaven’s wonders each time you spin around with the Father. For each time will be new and different. No two times will be exactly alike.

Chase After God and God Won’t Stop Chasing After You

Concluding, the Heavenly Father expressed to all of us:

I will take you to worlds you have never experienced before and realms you have never seen before. So don’t ever stop playing catch with Me. I won’t stop, if you don’t stop.(Your Heavenly Father)

Express Back to God Your Desire to Chase After Him

I was undone by the Father’s over whelming love and affection for me. So I echoed back to Him with deep assurance, “Father, I am never going to stop chasing after You nor will I ever stop desiring to be in Your presence all the time. For I never want to be outside Your shadow even for a moment. So I will never stop playing catch with You.”

[Get my book: Enjoy Heavenly Living Now and be able to chase after the Father as little children do.]